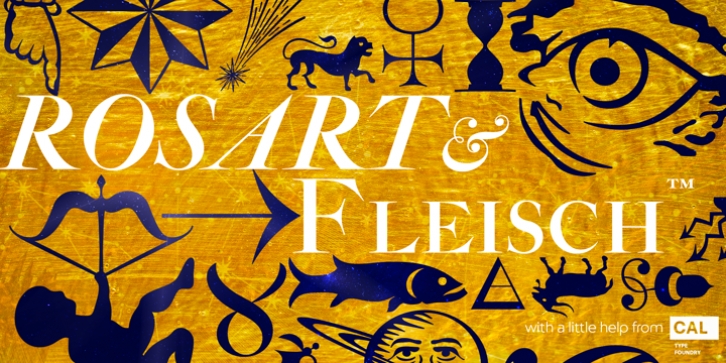 Rosart and Fleisch Hi Res was designed by Johann Fleischman, Jacques-FranÃ§ois Rosart, Dave Lawrence and published by California Type Foundry. Rosart and Fleisch Hi Res contains 12 styles and family package options. The font is currently #49 in Hot New F
This font is not just historic, but classy, timeless, and in its current form, a modern classic.

The original Titling Caps and icons Jacque FranÃ§ois Rosart painstakingly carved, now meticulously digitized to be a true, accurate, and complete representation of the original designs. You can get the fully matching family with ‘ALL’, or choose the set that meets your immediate needs:

Zodiac and Constellations – The Stars Have Aligned into a Great Font So what’s your sign? Whatever it is, R&F has it, and in so many ways! Pictograph, symbol, constellation and picto-constellation are all included. Constellations are useable even in scientific and education settings: based on current star charts and matched to Bayer designations, these stars shine both in design and accuracy!

Includes Rosart’s original moon and sun faces.Faces for the planets to match those for the sun and moon.Rosart’s symbols for the planets.Astrology symbols including, Rosart’s pictographs for the twelve signs.Constellations of the Zodiac from precise star charts.Precise small star shapes, so you can design other constellations.Pinwheel, saltires, asterisks, solid stars, and even the Christmas star.Dave Lawrence, ‘Each symbol was carefully designed to match the main font.’

Alchemy Symbols – Turns A Design into Gold From labeling your cupboard of magical ingredients to getting one step closer to the golden goose, these rare alchemical symbols are a treasure trove of possibilities. Including:

classic symbols for elementscombinationsmedicinalschemistrymathematical symbolsIncludes music symbols for titling, as well as Verse and Response symbols.

Seasons – Symbols to Keep Things Organized Throughout the Year

Classic weather stylings, including old fashioned lightning and an eclipsing moon with the four-o’clock shadow.Map MarkersReligious SymbolsPhases of the moon.Pointing symbols: fingers, arrows, triangles, with circles

Matching Italics CAL’s Dimension Slant Instead of sloping all the pictures and drawings to an even slant, a multidimensional approach was used. And each symbol was evaluated and crafted individually.

Pro World1 Font The pro world font contains all of these:

Latin Standard setRosart’s original backwards X alternate. Alternate U shape.In the italic: swash variants for the J, Q, and Y.Proportional Lining (default), proportional old style, small caps figures.CAL Dimension Slant, for dynamic italicsIncludes Rosart’s original moon and sun faces, along with additional faces for each planet.Rosart’s symbols for the planets and pictographs for the twelve signs of the zodiac.Constellations of the Zodiac along with small star shapes.Large stars, pinwheel, saltires, asterisksSymbols for chemistryMedicineMusic symbolsMathematical symbolsPointing symbols like the finger, acorn, arrow and triangle.Geometrical shapes.

Latin Pro character set for central European languages and Turkish.Rare kerns for Polish, Czech, Slovakian and others.Ligatures needed for some central European orthographies.Lowered German Umlauts for better line spacing.Cyrillic uppercase and small caps for eastern Europe, southern Europe, and Russia, with kerning.Rosart’s original Greek uppercase and small caps, but also tonos for monotonic Greek.Vietnamese, which has been kerned.Pinyin, including a special form of the Ãœ so that titles can be set closer.Numbers: A set of stacking (nut) fractions, along with very elegant automatic fractionsA large set of currency symbols in lining, old style, small caps, denominator and numerator sizes.Our first Retail Pricing Feature: (ss03 + ss04) Just turn on the feature and type $1.99 and Rosart will do the rest.Ampersand alternates.Numerator sized musical sharp and flat symbols.

Dave Lawrence, “From the moment I saw these letters I knew I had to make this typeface. What I didn’t know was that I would end up drawing most of Rosart’s special symbols… But it was too hard to resist.’