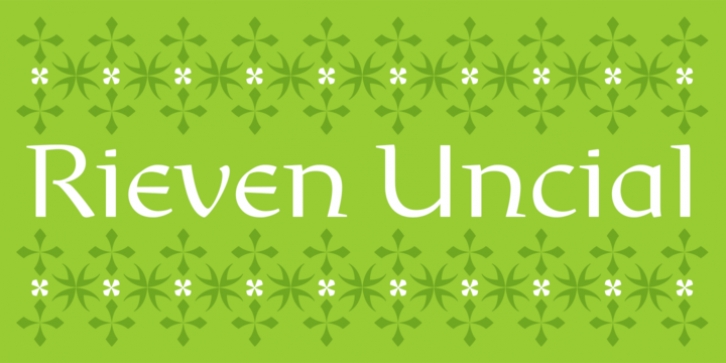 If a sans serif roman and an uncial got together and had a type-baby, it would be Rieven Uncial Pro. While it retains a richness and elegance found in traditional uncial forms, Rieven Uncial Pro has been carefully tempered by designer Steven Skaggs to be much more versatile. The accompanying italic works perfectly well with its uncial cousin despite being structurally quite distinct from it.

The character set of Rieven Uncial Pro has broader support for languages based on the Latin alphabet, seven sets of numerals (including oldstyle and superiors), prebuilt fractions (or use the numerators and denominators to compose your own), over a dozen Ligatures, plus more than one hundred Symbols, and Ornaments. It’s packed full of typographic goodies and the OpenType features to make it easy for you to use them.

Rieven Uncial Pro was awarded a “Certificate of Excellence in Type Design” in the 2010 TDC2.

Rieven Uncial Pro looks great on books, packaging, and signage, or anytime there is a need for an exotic feel to your text without being overly decorative.