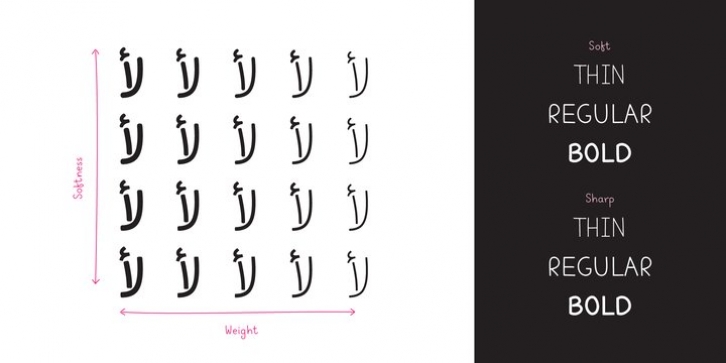 I first designed Molhim in 2016 as a personal project to digitalize my handwriting. Molhim 2016 was a static typeface, including two weights, and supported basic Arabic only. Since it was my first typeface to design, it had several issues regarding letterform design and aesthetics, good curve drawing, proportions, font programming, and correct OpenType features.

So, in 2019 I started redesigning my handwriting font from the beginning to produce a neat Multi-lingual typeface suitable for diverse purposes. Arabic letterforms are redrawn with a focus on proportions and unity.

Supports basic Arabic, and Arabic script-based languages, such as Persian and Urdu.
Supports Basic and extended Latin characters.
Includes 200+ ligatures and alternate styles for a natural flow of letters.
Latin small letters have both separated and connected script forms.
The variable font comes in two axes, Weight (wght) and Softness (SOFT): The Weight axis ranges from thin to bold, while Softness changes the stroke’s cap from a round cap to a sharp projecting cap.

Although I see the new Molhim Variable as a different typeface, I decided to keep the name ‘Molhim’ for the new typeface with the addition of ‘Variable’. Molhim is an Arabic word that means ‘inspiring’; this is how I hope people would perceive my handwriting.