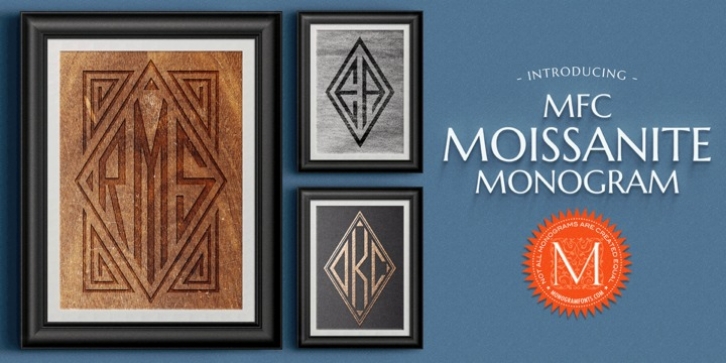 The inspiration source for Moissanite Monogram is the 1934 Book of American Types by American Type Founders. Found in that specimen book, in a section titled ‘Diamond Combination Monograms’, this popular diamond pattern of Moissanite Monogram was featured in Alfred Hitchcock’s film, North by Northwest. A classic diamond form, this monogram style is now digitally recreated and revived for modern use in Moissanite Monogram, complete with two and three letter monograms, and a selection of frames to add a final classy touch!

Moissanite Monogram is capable of traditional two and three letter format monograms, as well as numerous framing options. Download and view the Moissanite Monogram Guidebook if you would like to learn a little more. There is a guidebook for both the Pro and Standard fonts included in the font package.

Moissanite Monogram comes complete with both Pro and Standard format fonts. For those with programs that can take advantage of OpenType features, the Pro fonts are for you, but for others without the ability to use OpenType features, we’ve created separate fonts that make up the traditional styles contained in the Pro font.