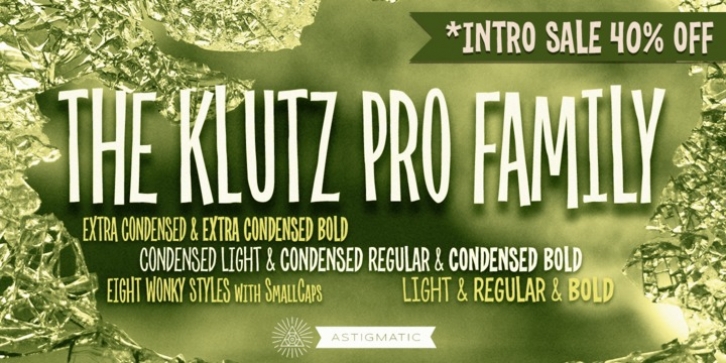 The Klutz AOE Pro Family was inspired by the plethora of naive hand drawn lettering becoming commonplace in modern advertising. What I hadn’t seen was a family of hand drawn typefaces, in a range of widths and weights, with both alternate capitals as well as small caps character sets…and so Klutz Pro was born.

The letterforms started with a few letters my daughter had drawn which I expanded on from there. Pulling from inspirations in retro cartoon titling and modern hand lettering playfulness, the full font was born, with weights and width to follow.

Quirky, eclectic, and just a bit ridiculous, it lends itself to a range of design typesetting – although I must confess, even though it all began with the Regular width, the Extra Condensed styles are my personal favorites. What’s your favorite?