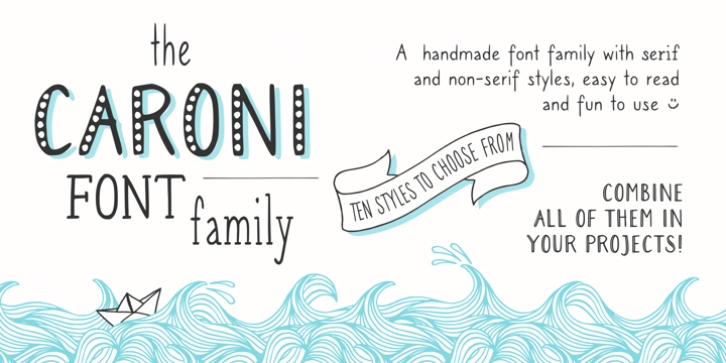 Caroni was designed by Franzi Paetzold and published by Franzi draws. Caroni contains 18 styles and family package options. The font is currently #48 in Hot New Fonts.

Caroni is a cute handmade typeface, which was originally created in 2018 as a free font. It has a simple and clean look, and works great for longer texts. Caroni has already been used in numerous children’s books, so now it was time to extend Caroni‘s look, and add more styles.

The Caroni Family at a glance

If you like Caroni, you will love the Caroni font family!

Caroni now comes in bold and italic, and it has nine awesome siblings:

Avenue (all dressed up with stylish serif strokes)Lime (the skinny version of Caroni)Avenue Lime (the skinny version of Caroni Avenue)Tabanca (dark and heavy, this is Caroni‘s brush version)Doubles (enhanced with fine lines)Fete (with fun little dots)Coconut (Caroni‘s outline style)Soursop (Outline with dots, a great display font)Carnival (a quirky and fun all-caps version)

Caroni was created while staying with a friend in Trinidad, hence the names 🙂