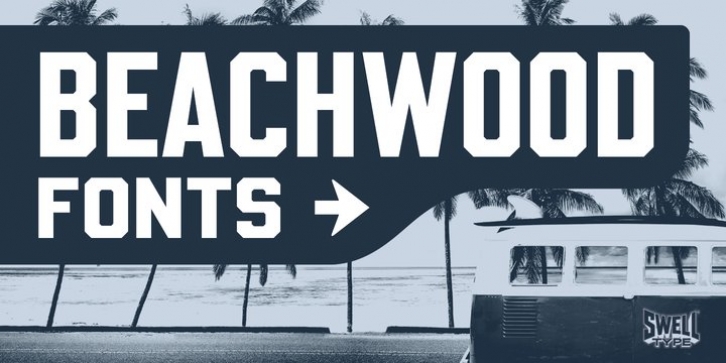 Beachwood was designed by John Roshell and published by Swell Type. Beachwood contains 81 styles and family package options. The font is currently #13 in Hot New Fonts.

Los Angeles’ distinctive “shotgun” style street signs were last produced over sixty years ago, but these durable porcelain and steel signs are still in use all over the city, by both humans and birds, who like to build their nests between the panels. The street names were drawn at wildly different widths to fit on panels which were manufactured in only one size.

Beachwood faithfully re-creates the extreme range of widths & weights on these vintage signs, and adds a new matching lowercase. Use the Beachwood Variable font file to access any width, weight or italic angle between the presets – a technology 20th Century sign painters could only dream of!

Each weight of Beachwood includes numbers based on the street signs, plus four alternate number sets based on the jerseys of Los Angeles’ pro football teams.

Beachwood is named for Beachwood Drive, the street which leads to the famous HOLLYWOOD sign, so we just had to include a bouncy HOLLYWOOD mode!

Five widths (from XTall to XWide), with eight Weights (from ExtraLight to UltraBold), each with matching italicsVariable font to access any width, weight or italic slant